If you've been following me over the last few months, you would most certainly know how many internet related issues I've been having since the start of 2020.

If not, let's quickly recap from the very beginning of our internet situation at home in South Africa... 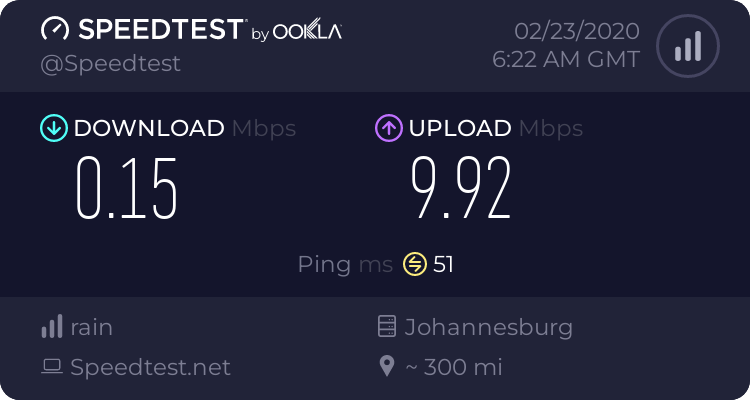 Contacted Afrihost customer support a few times, but they always blame it on the wifi even though we know for a fact it's most certainly not the issue, as it only happens at certain times of the day and are always fine in the evenings.

Turns out the reason is the network highly congested - I was on a fixed capped LTE product, paying R1350 per month and then Rain secretly launched a new product, unlimited LTE between 11pm to 6pm (19 hours), at R250 per month. Instead of migrating me as a Fixed LTE user onto another network, perhaps with higher QoS, I suddenly shared this network with the hundreds on the cheap R250 network, which is why my speeds dropped so dramatically outside of 6pm and 11pm. The R250 guys get cut off after 6pm and 11pm and then I have the network all to myself basically - but still, I'm paying for a 24/7 service, it shouldn't only be usable for 4 hours a day.

I eventually setup my little Linux server at home to perform a speed test every hour and save the results onto a DB. I then graphed out the results on a little React App that I called Rain Speedtest - I even registered a domain for it.

I ended up sharing this with some friends, customer support and on a few forums. To this day it still get a lot of traffic.

After sending the speedtest data to Rain and Afrihost, they eventually admitted the local LTE tower is extremely congested and there is nothing they can/will do about it. Afrihost eventually helped me out and sent me a new router + sim card for the MTN Network, the caveat is that it's capped at 150gb, so now I have to be even more careful with data.

Although not a permanent solution as its capped, at least it gives me a stable connection, that doesn't go as slow as Rain. It does sometime, become slow, but usually quite solid. 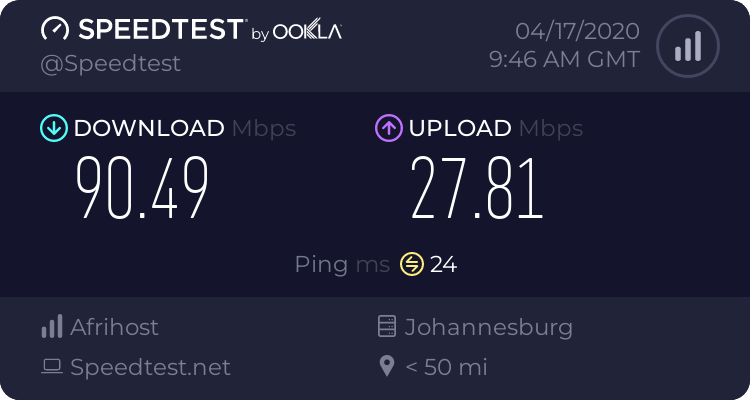 My permanent solution would be to get Fibre... After about 8 months and 100+ emails with multiple Fibre Network Operators, I finally got a company to install Fibre in our area. That will be my next blog post and how you can get that to happen if you don't have FTTH in your neighbourhood yet.